Obsessive Compulsive Disorder (OCD) is a type of anxiety disorder that features unwanted thoughts (obsessions) which can cause stress and lead to the performance of repetitive behaviours (compulsions) aimed at easing this anxiety. While compulsions can lead to short-term reductions in anxiety, many people with OCD report that both their obsessions and compulsions cause significant distress and often interfere with daily life. Although people with OCD are often aware their behaviours are maladaptive or don’t make sense, many are unable to consciously change them without help from a trained psychologist.

It is thought between 1 and 2 people out of every 100 experience OCD each year, meaning OCD is a commonly experienced psychological disorder. However, due to frequent inaccurate media representation, OCD is often misunderstood or oversimplified as the desire for cleanliness/order, which can cause confusion and a lack of support for people experiencing OCD. This article will act as a beginner’s guide; outlining the causes, symptoms and treatments of OCD, thus highlighting how OCD is more complex than many think.

There is no one single cause of OCD. Like many other disorders, there can be multiple risk factors involved which vary between individuals and affect them differently. Some of the factors that make it more likely for a person to experience OCD include:

Just as there is no single cause of Obsessive Compulsive Disorder (OCD), OCD doesn’t present the same way in all people. However, in most cases OCD symptoms can be broken down into obsessions and compulsions. Below are some of the key manifestations of OCD, in terms of these components.

Obsessions are repetitive and persistent thoughts, urges, or impulses that pop – unwanted and intrusive – into the mind and provoke feelings of anxiety due to their often unpleasant nature. Obsessions in OCD tend to follow common themes, the most common of which are:

There are many other obsession themes/subthemes of OCD which cannot be fully explored in this article; click here for another lesser-known subtype of OCD. However, the common thread is that when someone with OCD has one of these obsessive thoughts, they tend to try to suppress or neutralize it with some other thought or action. These are called compulsions.

Compulsions are the repetitive actions, rituals or behaviours performed in response to obsessions. These compulsions are executed to relieve anxiety or to prevent a dreaded outcome. Compulsions can be external (visible things done in the outside world) or internal (things done in one’s own mind). Many people with Obsessive Compulsive Disorder (OCD) realise their actions are not rational or helpful but feel compelled to carry them out anyway. Examples of common compulsions include:

Although these compulsions can lead to short-term reductions in anxiety, in the long-term they increase preoccupation with obsessions and maintain the pattern of responses to them.

What else keeps OCD going?

This is important to consider because if we can work out what is keeping a problem going, we can treat it by intervening to interrupt this maintenance cycle. In addition to compulsions, other maintenance behaviours of OCD include:

Treatment: What can be done to interrupt this maintenance cycle?

One theory of OCD focuses on the idea that it is not the intrusive thoughts themselves that lead to distress, but rather it is the meaning that people assign to them (the way thoughts are interpreted) that leads to such negative consequences as OCD. For example, a person with OCD may interpret their intrusive thoughts to mean they are a bad person or that something bad will happen and they are personally responsible for this. Once particular thoughts are interpreted as personally significant, this increases the likelihood of performing certain behaviours to keep yourself or others safe. OCD responds well to psychological treatments including cognitive behavioural therapy (CBT) and exposure and response prevention (ERP) as they address the obsession interpretations, compulsions and maintenance behaviours. The UK National Institute of Health and Care Excellence guideline for OCD recommends a mixture of both CBT and ERP for treating OCD, with a minimum of 10 therapist hours and treatment sessions increasing depending on OCD severity.

CBT involves the therapist and client working together to first identify and address the client’s interpretation of their intrusive thoughts. Then, the client and therapist work collaboratively to come up with an alternative interpretation of what their intrusive thoughts mean, which is more helpful and less threatening. This is the cognitive part of CBT. This alternative interpretation is then tested in the behavioural part of CBT, which involves a process of information-gathering including symptom monitoring, behavioural experiments, and exposure exercises (ERP).

While ERP is a treatment for OCD in itself, it is most effective when used as a behavioural component of CBT.

While CBT and ERP are the most effective forms of OCD treatment, selective serotonin reuptake inhibitors (SSRIs) can be effective in treating adults with OCD, should you be looking for a more medical intervention.

If you think you could benefit from speaking to someone about any of the experiences and/or treatments outlined in this article, we offer a FREE 15-MINUTE CONSULTATION with one of our specialists to help you find the best way to move forward. You can book yours here.

Saskia Huntley graduated from the University of Bath with a first class MSci (with Hons) in Psychology. Saskia is gaining valuable experience working as a Junior Therapist at Private Therapy Clinic and is assisted in providing the most evidence based treatments to her clients in order to help them achieve their treatment goals, with a special interest in OCD. In accordance with NICE guidelines, Saskia is trained in treatment protocols for both Cognitive Behavioural Therapy (CBT) and Exposure and Response Prevention (ERP) for OCD. Saskia Huntley graduated from the University of Bath with a first class MSci (integrated BSc and MSc with Hons) in Psychology. Saskia is aiming to continue down the psychological path and pursue her Counselling Psychology Doctorate.

Spelman, B. (2020). Are we all a little OCD? (The real truth about what that means). Retrieved from: https://theprivatetherapyclinic.co.uk/are-we-all-a-little-ocd/ 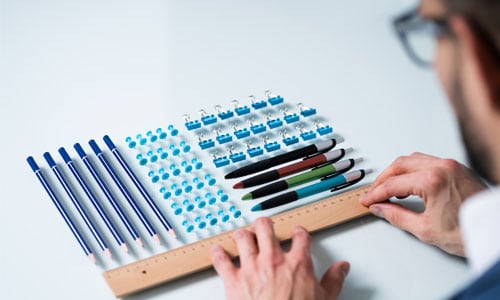 How to identify and overcome OCD intrusive thoughts