Depression entails far more than simply feeling down. Although low mood is the defining feature that most people associate depressive episodes, it can present itself in more ways than you might be aware of. Some forms of the condition can be brought on by life changes and circumstance, while others are rooted in biological factors. Here are the most prevalent types of the condition you’re most likely to encounter.

Also known as unipolar depression, if you suffer from this form of the condition, you’ll most likely experience symptoms throughout the day that include brain fog, a lack of motivation, loss of appetite and fatigue. It can often strike without warning and with no obvious explanation. To be diagnosed with major depression, you need to have experienced symptoms for at least two weeks.

Persistent depression is a long-term form of depression. It can last for years, with symptoms becoming more or less intense during certain periods. You could think of it as high-functioning depression. You may still experience difficulties maintaining relationships, but overall, you’ll feel as though you able to cope as over time you interpret your symptoms as being a part of your character.

Seasonal Affective Disorder usually affects people who live in the northern hemisphere where sunlight is severely restricted during the winter months. You’ll notice your symptoms increase and subside at the roughly same time each year with the passing of the seasons. Some of the most common symptoms include a loss of interest in activities, oversleeping, food cravings and relationships issues.

Manic depression is a now slightly outdated term that is accompanied by periods of mania or hypomania in those who have Bipolar Disorder. Whether you experience mania or hypomania will depend on whether you have a diagnosis of Bipolar I or II. To be diagnosed with Bipolar, you need to have experienced a manic episode for at least seven days.

This is the most common form of the condition on our list. It relates to life changes that have disrupted the balance in your life and presented emotional challenges for you to deal with. Events such as the passing of close friends or family, relationship issues and financial troubles can all contribute.

Postpartum Depression, also known as the “baby blues” occurs shortly after childbirth in women. It typically lasts for around two weeks as the hormones in the body begin to regulate themselves. In the rarer cases, it can last much longer, with symptoms including a disconnection from your child, feeling irritable, anxiety and lack of interest in sex.

In some instances of depression, the effects can be so severe that you develop psychotic symptoms – or psychosis, as it’s also known. This can affect around 20 per cent of people who experience a major depressive episode in their life. The symptoms include disorganised thoughts, delusions of grandeur, hallucinations and false beliefs.

Premenstrual Dysphoric Syndrome (PMDD) is a hormone-based mood disorder. It’s a more severe form of premenstrual syndrome that affects around 5 per cent of women. The symptoms included anxiety and behavioural changes, which can begin up to around 7-10 days in the lead-up to a woman’s menstruation period.

Atypical depression can be hard to identify as it can leave in the presence of positive events happening in your life. This can make it particularly challenging to address, as to your inner circle it may seem as if nothing is wrong on the surface. Symptom includes disordered eating, poor body image, insomnia, feeling rejected and chronic fatigue.

WebMD. (2019) Types of Depression. Retrieved on 11th January, 2020 from, https://www.webmd.com/depression/guide/depression-types#1

Healthline. (2019) 9 Types of Depression and How to Recognise Them. Retrieved on 11th January, 2020 from,https://www.healthline.com/health/types-of-depression#pmdd 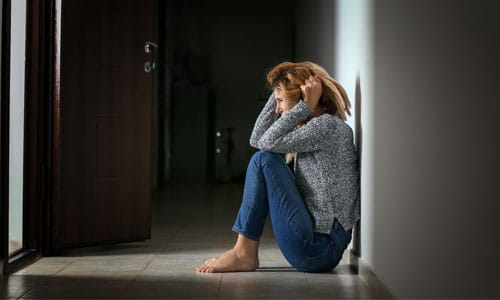